Sherif Awad, international film critic and film festival organizer, interviewed me as part of his series “Cinema After Corona.” We talked about how COVID19 affects production, Three Trembling Cities, webseries vs. standard TV series, and more. Also check out Sherif’s entire ongoing series, where he talks to directors, festival organizers, composers, cinematographers, and other film professionals.

I was part of a panel discussion at this year’s GenCon Film Festival, discussing the nuts-and-bolts of preproduction.

The web/video magazine ABCLatino, focusing on Latinx issues in the Hudson Valley, interviewed me in March regarding Three Trembling Cities for their April issue. . Many thanks to Maffy Malaver and the team at ABCLatino!

Erik Urtz, head honcho at Snobby Robot, sat down with me at Hollyweb after a screening of Three Trembling Cities to interview me about festival strategies for webcreators and filmmakers. 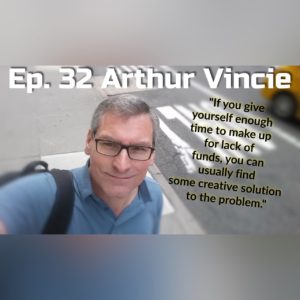 The Nothing Shines Like Dirt podcast interviewed me on line producing, directing, and just about everything else. Created by the talented Lesley Shannon and Elise Sievert Bhusan, this twice-monthly show interviews folks in a variety of creative positions and perspectives.

Interview on Off Center

In 2015 I was interviewed by Abdulai Jalloh for his wonderful art/music/culture show Off Center.

In November 2015 I was interviewed by the awesome indie filmmaker John Gaspard for his monthly blog Fast, Cheap Movie Thoughts.

In October 2015 I was on the GenreTainment podcast, a show interviewing sci-fi/fantasy/horror authors, filmmakers, and artists. Produced by Marx Pyle, author of Television on the Wild Wild Web, a must-have book for webseries creators

In late 2014 I was a guest on the wonderful podcast Sci-Fi Saturday Night, a Boston-based sci-fi/horror/genre filmmaker/author/actor-focused ‘cast that’s had some great interviews and reviews.

World-Building on a Budget, at UAT

In 2013 I was invited by the University of Advanced Technology in Arizona to talk about how to ‘do sci-fi on a budget.’